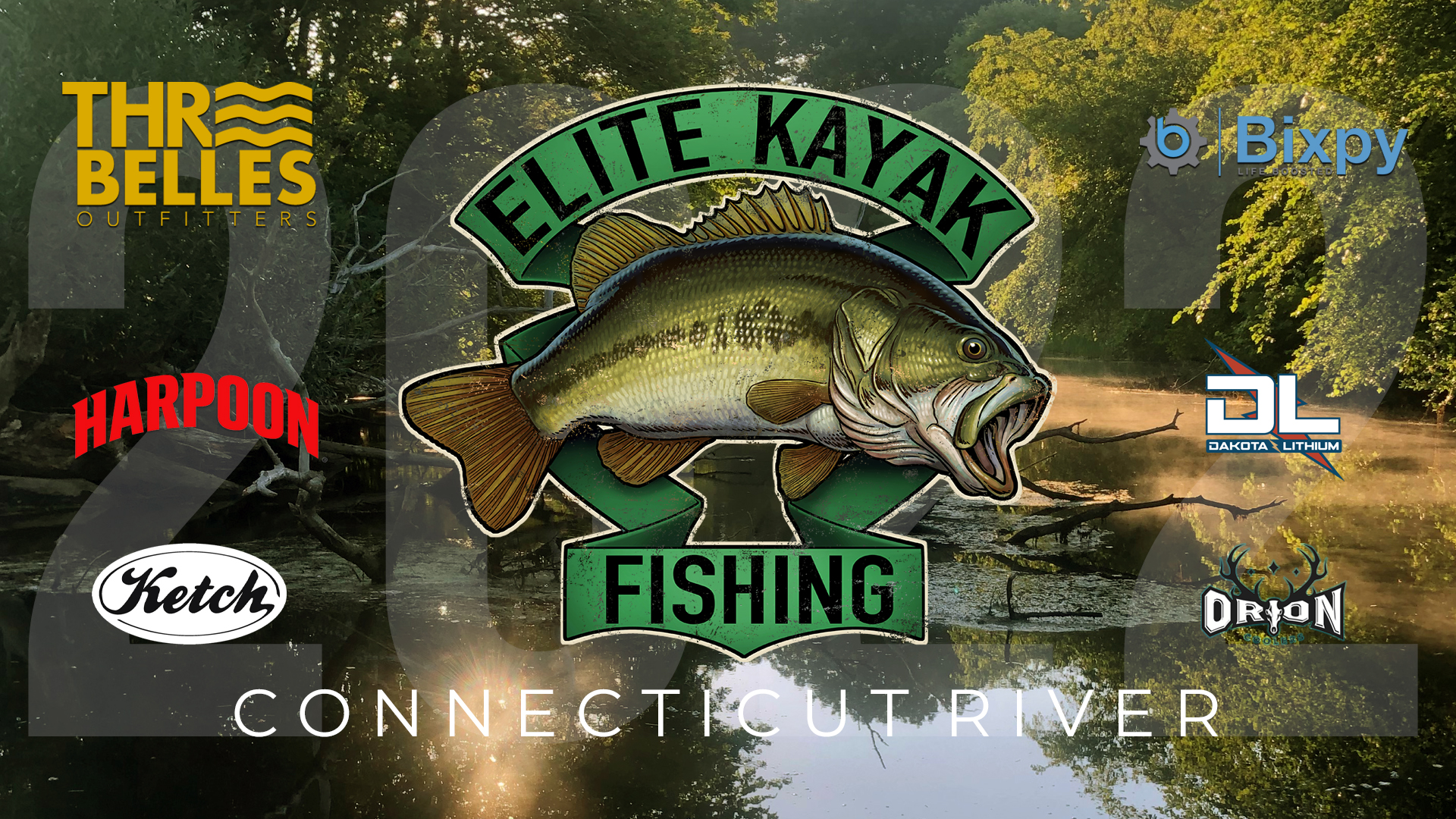 Besides a few river systems, Massachusetts doesn’t have a single public body of water that can play host to a large bass fishing tournament. The biggest public lake in the state is Fall River’s South Watuppa Pond, which clocks in at a mere 1,460 acres.

So when planning this year’s schedule, we looked to the rivers, with the Connecticut River ultimately being the place we chose for the third stop of the 2022 season.

Lots of unknowns surrounded the river. It’s not a world-class fishery, which is often a requirement for anglers when choosing to fish an event. It’s not known to produce giant bass, which is also something that many anglers factor in when deciding to fish a tournament. But at the end of the day, it’s a tournament, and from that perspective the latter two things don’t matter. Big fish, little fish, someone’s going to win…

And thirty-nine anglers hit the river last Saturday in hopes of doing just that.

Pre-fishing reports were mixed. With low water levels, anglers found themselves searching for accessible, quality fishing spots, and while some anglers found fish, others struggled.

Being the first Elite Kayak Fishing event on a river, it was interesting to watch how anglers adapted to the different conditions.

Tournament day called for temperatures in the upper 80s, and plenty of weekend boat traffic to navigate. But despite the unknowns and the inherent challenges of river fishing, the Connecticut River didn’t disappoint.

Kevin Senecal jumped out to quick lead on Saturday, being the only angler with a 5-fish limit within the first two hours. Not long after, other anglers started closing in, with Gerard Elias taking the top spot and Chris LaCourse bumping Kevin down to third.

As the day wore on, the leaderboard continued to shift, with anglers moving up and down consistently. In the last few hours, however, a handful of anglers began to make their stand, and they stood very close together, just a quarter inch separating the top four paying spots.

In fact, the top thirteen or so could have won it with a few good culls or one big fish.

Bruce Levy spent time at the top of the leaderboard, but ultimately fell to fourth place with 81.5 inches, earning him $597.75. He also landed the day’s Bixpy Big Bass—a 20.25 tank—and for it won an additional $500 and a Bixpy J-2 Outboard Kit!

Also having spent time at the top, Gerard Elias found a consistent bite that allowed him to catch fish throughout the day. His 81.75 was good enough for third place and a $797 payout.

Having planned to fish the Oxbow, some confusion about parking in trailer spots at the ramp forced Matthew Zapala to switch gears and head north to another launch. Misfortune that turned into good fortune. Kismet, as they say. Matt got on the water late, but he was able to find the fish needed to carve out a solid second place finish with 82 inches of Connecticut River smallmouth, boosting his net worth by $1,075.95.

With the Connecticut River in his backyard, Scott Rhodes took his knowledge of and experience on the river right to the top. With 82.25 inches of largemouth bass, Scott walked away with the first place trophy and an extra $1,514.30 in his wallet. 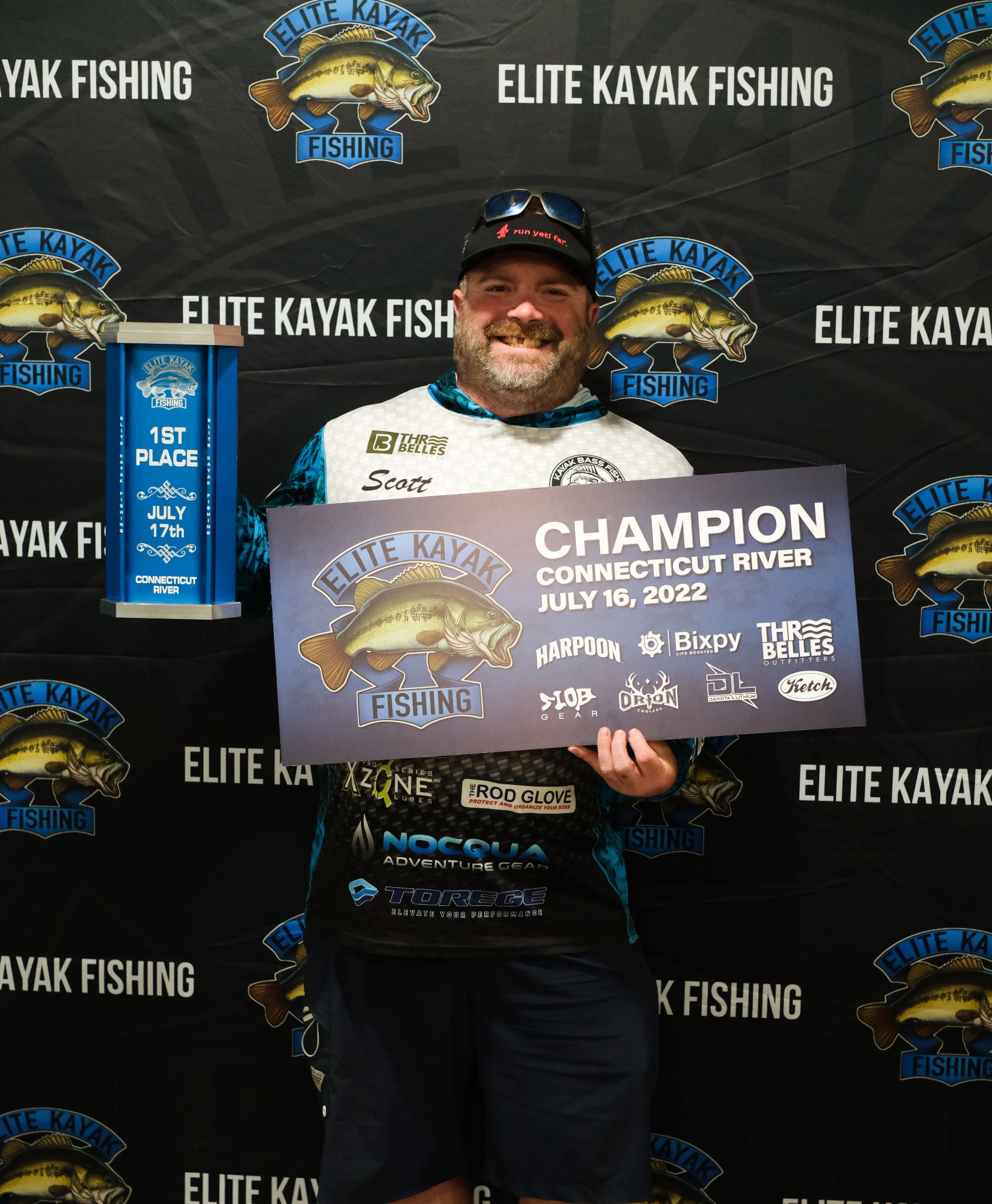 Congratulations to our winners, and thanks to everyone who came out, especially those who joined us to celebrate the winners at the awards ceremony!

Special thanks, as always, to Lauren Furey from Three Belles Outfitters for coming out and supporting us, assisting with the setup at the awards and for everything she and Three Belles does for this kayak fishing community. Second to none!

And to all our other sponsors—Harpoon Brewery, Dakota Lithium Batteries, and Orion Coolers, and YakAttack—thank you!

We’d like to also thank Slob Gear, Chad Hoover, Joe Haubenreich, and Busy Bee Printing for assistance in getting these new big checks made, and quickly!

If you placed in the top three at our first two events, we have one for you.

Our next event is on New Hampshire’s Lake Winnipesaukee on August 27. Registration is open now. See you there!