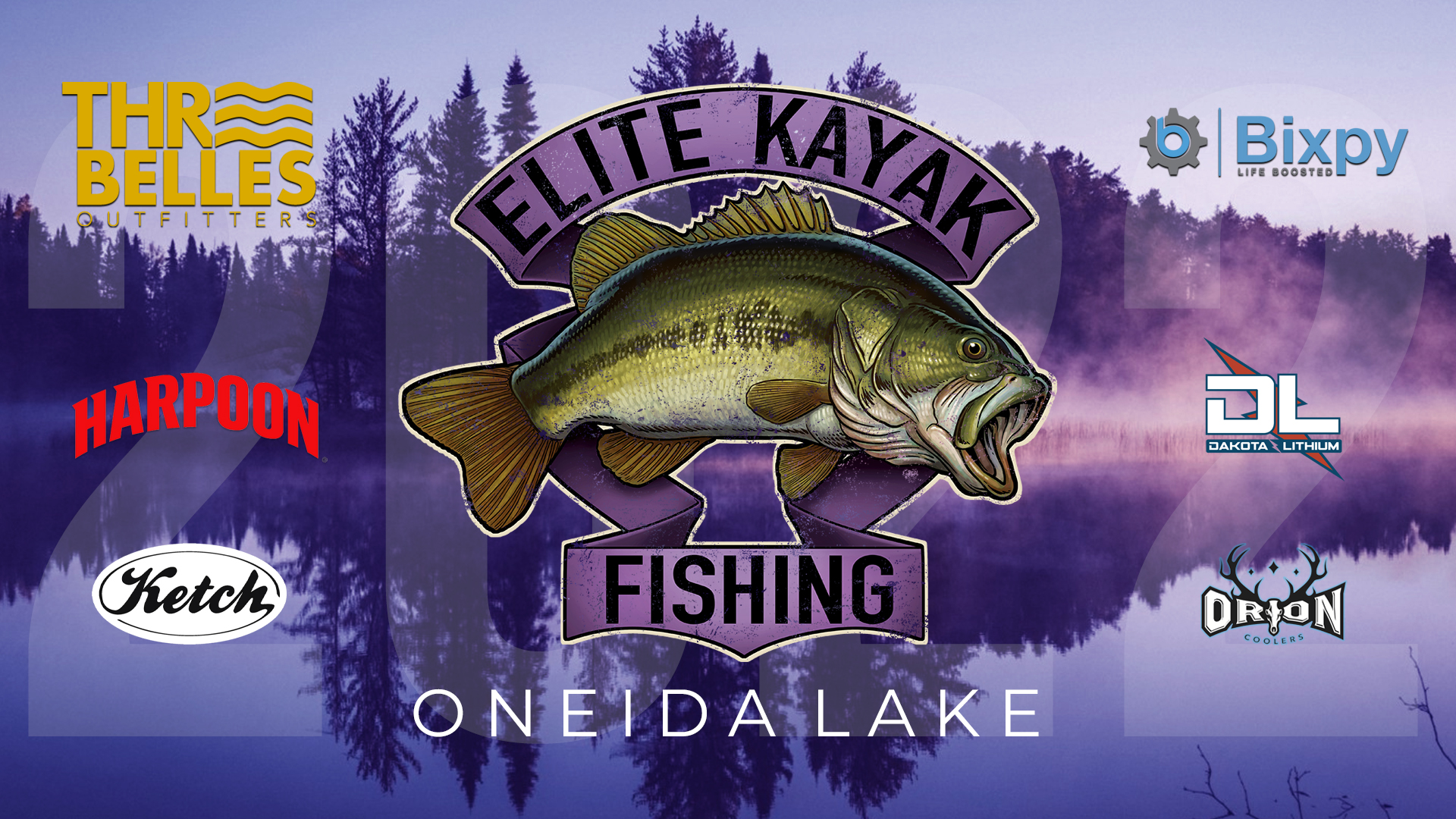 The second Elite Kayak Fishing event of the season took place this past Saturday on Oneida Lake.

We had 41 anglers fish this one, a lower turnout than we would have liked due to a conflict with another big event on Lake Winnipesaukee, but we appreciate those of you who chose to support us on Oneida.

The weather was great for this one, though more clouds would have helped everyone out, we think. Pre-fishing reports were positive earlier in the week, but come Friday things changed and the bite got tougher. A major mayfly hatch taking place and the fish gorging on food that was literally falling from the sky all around us didn’t help matters.

Despite the tougher bite on Saturday, many anglers found fish, and most caught at least one. However, a number of heavy hitters who have done well in our past events struggled this day. But where one falls, another rises. Such is tournament fishing.

We paid out four spots for this event, with Jacob Moulton taking the bottom paying spot with 85.75 inches.

Simon Morgan is no stranger to anyone fishing the national tournament scene, and seeing his name at the top of the leaderboard should come as no surprise to anyone. His 86 inches earned him a third-place finish as well as the optional Double Down sidepot—which the winner of the event opted not buy into (he has regrets, no doubt).

Dale Van Horn tossed a solid 89 inches on the board, anchored by a slobby 20.75-inch largemouth, good enough for second place and Bixpy Big Bass honors, earning him a Bixpy J-2 Outboard Kit!

Leading up to the event, Adam Rourke had a life-changing experience during a KFL match, where he flipped his kayak in extremely rough conditions. With the help of Jake Angulas and others, he was able to safely get to shore, shaken but thankfully alive.

Adam then hired a diver (a brilliant idea) to recover all of his rods, and Three Belles Outfitters had him in a brand-new Jackson Kayak Take Two almost immediately, and then it was on to Oneida.

He struggled in pre-fishing, but one 19-inch smallie caught on a point gave him enough confidence to make that his starting spot on Saturday morning, and it proved to be the right choice. 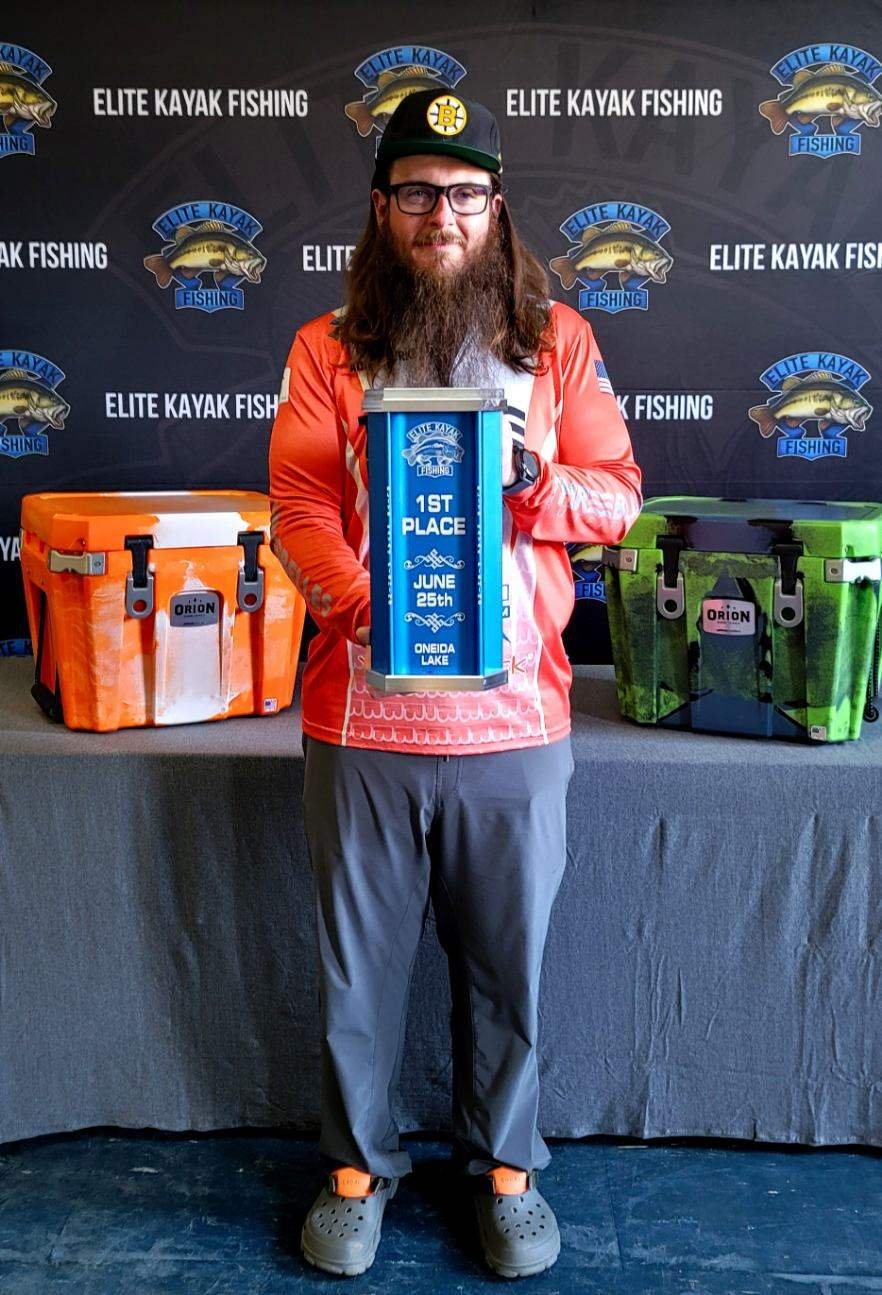 Great job, sir! You earned it. And congrats to all the winners!

Full results can be found here.

Thanks again to everyone who came out and supported Elite Kayak Fishing, and a huge shout-out to our sponsors—Three Belles Outfitters, Bixpy, Harpoon Brewery, Dakota Lithium Batteries, and Orion Coolers!

Extra special thanks to Lauren Furey for going above and beyond what most sponsors would do, by traveling all that way to ensure everything was set up a ready to go come time for the awards.

And to Reel Tournament Management, thanks for judging and managing this one. We appreciate it!

Our next event is coming up in a few weeks, July 16, on the Connecticut River. The entire river within the state of Massachusetts is in play. Should be a great one! We hope to see you there.

The Weather Looks Great for Oneida

Oneida week is here, and we’re excited for another great event!

If you’ve been keeping an eye on the weather, it’s setting up to be a fantastic day out there. Warm, partly sunny, and favorable winds—south/southwest to start, then shifting to a south wind, 5 to 10 mph.

Obviously this will likely change some between now and Saturday, but as of right now it’s setting up to be a great day on the water!

For those looking to double dip, New York Kayak Bass Fishing is also hosting an event at the same time. They’re a local trail and we’ll be supporting them as they are supporting us. Anglers do not need to be a NYKBF member to fish their event (though the entry fee for non-members is $50 instead of $40 for members).

One thing of note, though: they use TourneyX. So you’ll need an account with TourneyX if you wish to compete. You can register for their event here.

We’ll see you out there!